, is a function defined as follows: for

is the unique number

in the open interval

Here is a graph of

from a zoomed out position, where the horizontal asymptotes are clear.

Here is a more close-up version, with the tangent line through the origin (the line

) drawn, indicating that the origin is a point of inflection for the graph: 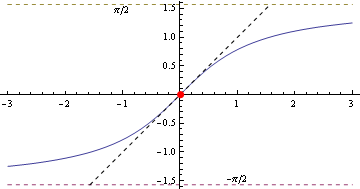 We use the inverse function theorem, and the fact that the derivative of

By the inverse function theorem, we have:

Plugging this into the above, we get:

The second derivative is given as:

We can integrate this using the inverse function integration method, and obtain:

as the part to differentiate and

as the part to integrate:

For the second integration, we integrate using the

All the antiderivatives can be expressed in the form:

are polynomial. Note that

is ambiguous up to addition of polynomials of degree

if we are integrating

The function can be antidifferentiated any number of times using integration by parts.

The power series for the function about 0 can be obtained as follows.

We know that for the function

, we have the power series:

Integrating with a definite integral, we get:

The left side is

By the alternating series theorem, we note that the power series on the right converges for

, so by Abel's theorem, we conclude that it converges to

of the respective inputs. We thus get: