Difference between revisions of "Sinc function"

, is defined as follows:

The picture is a little unclear, so we consider an alternative depiction of the graph where the

-axis are scaled differently to make it clearer: 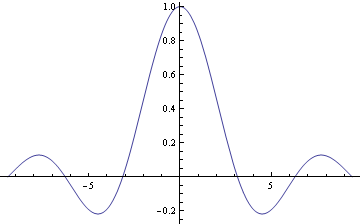 : At any such point, we know that the function looks like

in an open interval about the point, so we can use the quotient rule for differentiation, which states that:

Combining the two computations, we get:

The latter limit can be computed in many ways. One way is to use the L'Hopital rule:

The computation at other points can be done using the usual method for computing derivatives, i.e., with the quotient rule for differentiation combined with other rules. Overall, we get:

The limit procedure used for the first and second derivatives can be extended to the computation of higher derivatives at zero. However, this process is tedious. An alternative approach is to use the power series expansion:

Since this is a power series, it is also a Taylor series. Thus, the coefficient of

Rearranging and simplifying, we get:

The first few derivative values at zero (starting from the zeroth) are:

These is no antiderivative for this among elementary functions. However, we can create a new function that serves as the antiderivative:

is termed the sine integral.

Integration of transformed versions of function

The following fact is true, but not easy to prove:

Because the function is an even function, this is equivalent to the following:

The second antiderivative is:

To obtain this, we use integration by parts to integrate the function

Higher antiderivatives of the sinc function can be computed in the same manner using integration by parts. Up to the arbitrary polynomial additive, the antiderivative is expressible as a polynomial linear combination of

Dividing both sides by

We note that the power series also works at

), hence it works globally, and is the power series for the sinc function.